Turtle Wife’s free newsletter,
TURTLE STORIES, NEWS & VIEWS,
is published bi-monthly, on no set date.
I will never sell, trade or give away your
e-mail address — period. Feel free to forward this
newsletter to friends!

** TO SUBSCRIBE to this newsletter **
Send a message to newsletter-subscribe@turtlewife.com.
Wait for a confirmation message in your e-mail. Simply
Reply to the message (no text necessary), and your address
will be automatically added to the mailing list.

Send a message to newsletter-unsubscribe@turtlewife.com.
Reply to the confirmation message in your e-mail (no text
necessary), and your address will be automatically removed.

Giant tortoises that were once driven to the brink of extinction
on a tiny Galápagos island have made an amazing comeback,
a new study reveals.

The tortoise population on the island of Española dwindled to
just 15 animals in the 1960s, because of damage to their
habitat caused by feral goats. Then, about 40 years ago,
captive-bred tortoises were released on the island, and now
there are about 1,000 of them living and breeding in the wild.

“It’s one of the greatest conservation success stories,” said
James Gibbs, a conservation biologist at the SUNY College
of Environmental Science and Forestry in Syracuse, New York.
Gibbs led the study published today (Oct. 28) in the journal
PLOS ONE. 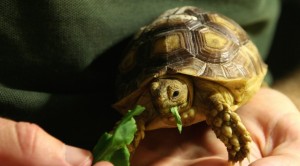 28 tortoises smuggled into UK are now
living at Blackpool Zoo

Known as the Sulcata Tortoises, these tiny creatures
are all under a year old and just a few inches long. But
within time, these relatively rare tortoises could get as
big as 10 stone and live up to a whopping 100 years.

“We have built a fantastic relationship with Borderforce
over the years and work closely with them to rehome
any seized reptiles,” John Paul Houston, assistant head
of the Animal Department at Blackpool Zoo, said.

Boom in shipments of turtles overseas could lead to
protective measures.

WASHINGTON — The U.S. government is proposing a

new level of protection for certain freshwater turtles,
concerned that a massive increase in overseas demand
for the reptiles could hurt their long-term prospects.

The proposal from the U.S. Fish and Wildlife Service involves
four species: the Florida softshell, the smooth softshell,
the spiny softshell and the common snapping turtle.

While none of the four species is at risk of extinction,
federal officials and biologists say that a booming international
trade in turtles had prompted concerns about the animals’
long-term survival.

Hitherto viewed by many here and elsewhere as
an insignificant part of the fauna of the Blue Mountains,
reptiles have of late been generating considerable
interest among not only wildlife enthusiasts and students of
wildlife biology but also the public on account of growing
awareness about their role in protecting this ecologically
fragile area.

Nicholas Montagna was flummoxed.
One of his two giant tortoises went missing Sunday, leaving
Montagna, his family, neighbors and other in the community
searching for answers, and for Cecil. And even though the
100-lb-plus tortoise is safe and sound once again, his
disappearance remains a mystery.

Read more--about yet another sulcata tortoise lost
and found. 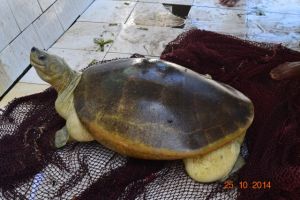 The pond, at Botataung Pagoda in downtown Yangon, has
been home to the turtle since at least 1987, but probably
longer. Although its origins remain clouded in mystery, we
suspect the turtle was brought from the lower Ayeyarwady
Delta many years ago and released into the pond by a traveling
pilgrim. The symbolic release of fish, turtles, and small birds
is commonplace at Buddhist temples throughout Asia; by
liberating a captive animal, a person is believed to earn
karmic merit.

Here’s a quiz I never expected to see:
Which species of sea turtle are you?
I got Green Sea Turtle. Ed. 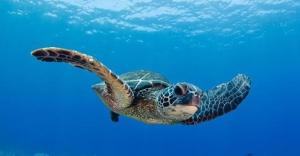 Where do you fit in with the seven species of sea turtles?
Find out from the experts at Sea Turtle Conservancy…

Community Post: Which Species Of Sea Turtle Are You?
http://www.buzzfeed.com

Something strange is happening to the diamondback terrapin
turtles of Jamaica Bay, though there’s some question as to
precisely what that strange thing means.

“Nobody has ever seen anything like this before,” said Russell
Burke, a Hofstra University ecology professor and one of the
foremost experts on Jamaica Bay’s population of diamondback
terrapin turtles, the largest concentration in the state.
“It’s a puzzle.”

Extinction is forever, as the conservationists say.
Desiccation, it turns out, is only nearly so.

The giant Galápagos tortoise known as Lonesome George,
whose death in 2012 signified the end of his subspecies,
has been preserved for posterity in a one-of-a-kind effort
by expert taxidermists. But the work took about half a
year longer than expected, in large part because the tortoise
stubbornly refused to dry out.

“That’s always the great unknown, how long the animal
will take to dry,” said George A. Dante Jr., whose studio,
Wildlife Preservations, in Woodland Park, N.J., was given the
task of preparing the 170-pound, five-foot-long tortoise.
Lonesome George — now fully dry and fully preserved, posed
as if he were looking for his favorite food, cactus — is on
display until early January at the American Museum of Natural
History, one of the partners in the effort.

Why Being a Reptile Lover Means Always
Having to Say “I’m Sorry.”

You Know You’re a Herper
WHEN YOU DREAM IN GREEN

A nonprofit 501(c)(3) organization dedicated to the
conservation, preservation of habitat, and the promotion
of proper husbandry and captive propagation of turtles and
tortoises.  www.nytts.org

TURTLE RESCUE OF LONG ISLAND: A non-profit
501(c)(3) organization that works to rehabilitate native
turtles and find homes for those that cannot be released.
Also takes in and adopts out turtles and tortoises of all
species that can no longer be kept for whatever reason.
Location, Long Island, New York www.turtlerescues.org

Find Great Gifts for Turtle Lovers at
the Turtlewife Store! 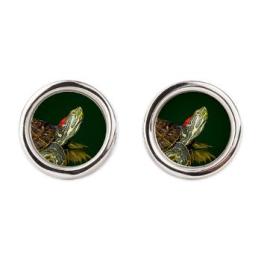 I will never sell, trade, or give away your
e-mail address—period.

CONFESSIONS OF A TURTLE WIFE is

CONFESSIONS OF A TURTLE WIFE:
The story of a turtle-challenged marriage.
Read Chapter 1 at www.turtlewife.com.

Here’s a roundup of imaginary books and movies about turtles and turtle people I think would be a hoot!