Chapter 1 – Confessions of a Turtle Wife 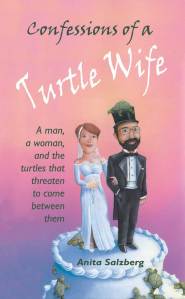 GETTING UNDER THE SHELL

On our first date, my husband, Allen, mentioned in passing that at the age of twelve, he’d kept thirty pet turtles. “Turtles are wonderful animals,” he said. “They’re really underrated.”

My first mistake was thinking that this interest was cute.

My second mistake was thinking that it was ancient history.

Today, eleven turtles populate a three-foot-wide by nine-foot-long habitat that occupies one wall of the kitchen in our Queens, New York, apartment. Two more turtles occupy a 40-gallon fish tank in our dining room. A five-inch-long box turtle has the run of the house. And our bathtub functions as a motel for anywhere from one to fifty itinerant turtles. (Not to worry. We have two bathrooms.) There’s even the occasional dead turtle in our refrigerator, wrapped in aluminum foil, waiting to be taken to the vet for an autopsy to determine the cause of death. The day I found poor Sam I thought he was a leftover tuna fish sandwich.

Why do I put up with Allen’s turtle obsession? Because it’s his greatest passion . . . after me.

In the months following our first get-together, in the fall of 1985, dating segued into romance. Allen was a warm, intelligent man who made me laugh. We had a lot in common. We were both in marketing. I worked at an ad agency as a direct response copywriter (in other words, I wrote “junk mail”); Allen was as a freelance public relations consultant. We shared an addiction to books and a love of movies, museums, and plays. We’d both been raised in New York City (me in Brooklyn, Allen in the Bronx), and both now lived in Manhattan.

I was impressed by Allen’s decency: the time I tossed a bag of trash onto a heap of garbage bags in my building’s incinerator room, Allen insisted I put the bag down the chute. It was unfair to my neighbors, he said, to add to the mess. He himself was touched, he told me, when, during our second date (a cold winter night), I’d insisted that we warm up over a subway grate while waiting for a bus. Through such small gestures our love grew.

Turtles reappeared in Allen’s life-and entered mine-one weekend in April, when, eager to get out of Manhattan for an afternoon, I suggested we visit the Bronx Zoo. Visiting the zoo was fine with Allen, provided we stop at the Reptile House to see the turtles.

We arrived at the zoo on a balmy afternoon, and paused to admire the peacocks, giraffes, and lions. But after two minutes, Allen grabbed my hand and began leading me away from the African Veldt. “Hey wait, I want to watch the lions,” I said.

“No problem. We’ll come back after we’ve seen the turtles.”

My desire to see the big cats evaporated. We could see them later, or another day. I was in love and amenable to Allen’s suggestions. Five months had zoomed by; we were planning to move in together.

At the Reptile House, we stopped just inside the entrance to scrutinize a display of newly-hatched snakes and caimans. That’s when Allen spied a flyer for The New York Turtle and Tortoise Society (NYTTS for short) on a bulletin board next to the display. “This is wonderful,” he said. “First I fall in love with you, and now I find people who love turtles.” Allen joined the Turtle Society the next day.

Apparently, lots of people loved turtles. At the time there were more than 500 Turtle Society members in the New York City area alone. The Society held monthly meetings at the American Museum of Natural History, in a room right next to the Hall of Reptiles.

Within weeks of joining the Turtle Society, Allen confessed that my love and support had given him new impetus to return to his first love: turtles. He assured me that he’d acquire, oh, maybe two turtles, and that when he moved in with me in late fall we could find room in the apartment for say, one twenty-gallon fish tank.

Of course I agreed . . . how could I deny the love of my life two turtles?

Allen hadn’t seen turtles in pet stores in many years. That’s because, during the 1970s, a near-epidemic (hundreds of thousands of cases across the country) of turtle-related salmonella poisoning among young children had prompted laws banning turtle sales by local pet stores. Jim Van Abbema, a new Turtle Society acquaintance, suggested that Allen would find turtles in Chinatown, where they were sold for food. “But be prepared for a shock,” Jim warned. “They’re kept under terrible conditions.”

Allen was on his way to Mott Street minutes after hanging up the phone. I stayed behind at his place. When he returned a couple of hours later, he gingerly pulled two thrashing, six-inch-long turtles out of a paper bag and held them up for me to examine. “These are diamondback terrapins,” he said. “They’re saltwater marsh turtles native to the east coast.”

The struggling terrapins had jet-black eyes, gray shells, gray skin with black speckles, and wide webbed feet with long, spiked claws. Their broad, ivory-colored jaws made them appear to be wearing permanent smiles. I could see why Allen liked them; they were pretty.

Watching them, Allen’s expression turned grim. “It was awful,” he said. “The fish market where I found them had dozens of water turtles crawling around a big, filthy tank with no water. When I showed the shopkeeper the ones I wanted, he said, ’I prepare for you? Chop head?’ I almost grabbed the cleaver out of his hand. ‘No, no,’ I said. ‘Keep fresh!’”

I was both amused and appalled at Allen’s description. “That’s terrible.” I smothered a giggle. Yet I was proud that Allen had saved two beautiful creatures from being turned into a meal.

Allen named the larger terrapin Soup. “After all,” he said, “that’s what I saved her from becoming. What should we call the other one?”

I knew what we should call her. We’d recently seen Lily Tomlin’s one-woman Broadway show, The Search for Signs of Intelligent Life in the Universe. During one sketch, Tomlin held in one hand a reproduction of an Andy Warhol painting of a Campbell’s Soup can. In the other hand, she held a real Campbell’s Soup can. “This is soup,” she said, indicating the painting, “and this is Art,” she concluded, indicating the can. Then, she reversed herself: “Art,” she said, raising the canvas. “Soup,” she declared, holding up the can.

Allen installed the terrapins in a twenty-gallon fish tank at his apartment. To his dismay, and my surprise, Soup died while we were on vacation. So, Allen made a repeat trip to Chinatown where he acquired another diamondback terrapin and two softshell turtles.

The softshells were unlike any turtles I’d ever seen. Their pancake-shaped bodies looked like olive-colored Frisbees with long limbs and necks, webbed claws, narrow heads, and tiny elongated snouts.

Allen told me that their aerodynamic shape allowed these river turtles to outswim some species of fish. He set them up in a second fish tank, and they shuffled themselves under the layer of pebbles that lined the bottom of the tank. Allen named them Nessie and Houdini after their long necks and their fondness for hiding out under the pebbles. He called the new terrapin Sid Vicious, because, even though it was a female, it had a savage bite.

Allen now had four turtles and two twenty-gallon tanks at his place. I felt the situation was under control. These new creatures were pleasant to watch as they swam and basked. More importantly, I didn’t take care of them. My complacence was short-lived.

That October, a month before we moved in together, Allen insisted we visit New Jersey’s aptly named Turtle Back Zoo. We were there for a private tour of the zoo’s extensive turtle collection, available only to Turtle Society members.

Two other members, Ray and Monica, had arrived ahead of us, also for the tour. For an hour, I listened to Allen and his new friends ooh and aah over hundreds of turtles not on view to the public. Then, I was ready to move on. The temperature in the room housing the turtles was over 80 degrees. I was hot, out of sorts, and overwhelmed by the sight of so many unfamiliar animals. Before that afternoon, I’d believed there to be between six and twelve types of turtles in the world. Allen now set me straight: there were over 250 species.

Then the zoo’s turtle keeper, Allen Foust, led us into the education building to discuss something called a “turtle adoption committee.” I turned to my Allen, perplexed. “Turtle adoption committee? Does he want you to take in more turtles?” I put a hand on one hip and looked at him accusingly. “You knew all about this, didn’t you?”

“I swear, I didn’t know a thing,” he said. He grinned. “But it sounds intriguing.”

Allen may have been telling the truth about being in the dark about the committee, but Ray and Monica were evidently charter members. They handed out photocopied sheets headed “Turtle Adoption Application.”

“Here’s what I think we should ask people who call the Turtle Society to adopt a turtle,” Ray said. “We should only give turtles to responsible people.”

The form listed such questions as, “Why do you want a turtle?” “Where will your new turtle live?” And, “If you’ve ever owned a turtle before, is it still alive?”

After reading the form, I still didn’t understand how all this concerned us.

“So,” said Ray, “is there anything else we should ask?”

Allen decided not to reveal to the others that he hadn’t known about the committee beforehand. “No, there isn’t,” he said. “These are great questions.”

“Good,” said Allen Foust. “Take some forms and make copies. Everyone who wants to adopt a turtle should fill one out. Based on their answers, you’ll decide whether or not they’ll make good owners. Ray and Monica, you’ll handle New Jersey adoptions. Allen, you’ll take New York. We’ll run your phone numbers in the next Turtle Society newsletter.” Foust settled back in his chair with a satisfied sigh. “There are thousands of turtle owners in New York and New Jersey, and they all call me to take turtles when they decide to get rid of them,” he said. “Now, they can call you.”

“You mean people are going to drop turtles off at my place?” asked Allen, delighted at this splendid turn of events. I had a sudden, all-too-prophetic vision of running a year-round resort for homeless turtles.

“Did he say thousands of turtle owners?” I asked. Allen was about to move in with me. Turtles, I liked . . . well enough. The idea of being inundated with turtles . . . gave me pause. Would hordes of people want to give Allen turtles? Where in my one-bedroom apartment would we find room for them? How would my two cats take to them? The cats had readily accepted Allen, and he them. Still, would the cats tolerate turtles?

“Don’t worry,” Allen said. “Thousands of turtles owners won’t be calling. Besides, I’ll take care of everything. I promise.”